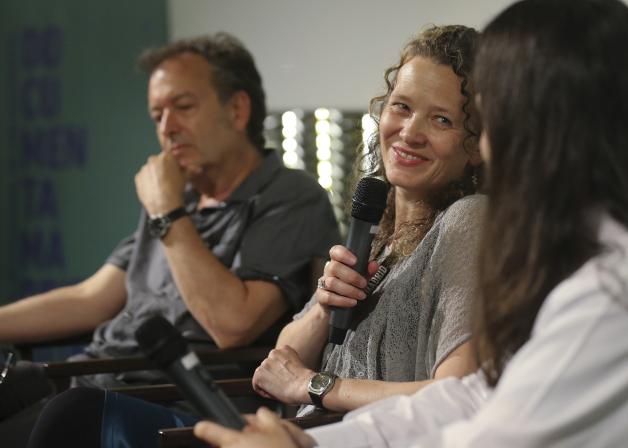 How did you develop the idea for Becoming Animal?
Emma had read The Spell of the Sensuous and Becoming Animal by David Abram when the books first came out, and was deeply affected by them. We had discussed the ideas, but at the time had never thought of making a film directly related to them. However, after Emma attended a workshop with David four years ago, she saw the transformative effects his words and ideas had on those who were present, and this led her to ask him if he would consider embarking on a film project as an experiment. Peter was a natural choice for a collaborator, as his work possesses a similar transformative quality. We had discussed extensively over the years of our friendship how the current ecological crisis was a crisis of perception as much as anything – this film was a way of examining some important aspects of the meaning and implications of that crisis.

How did you get David Abram to participate in the film?
When Emma attended David’s workshop and asked him if he would be interested in participating on a film project, he was initially unsure about the process. He had been asked many times before to get involved in projects based on his ideas, but recognized that translating the complex ideas in his books to the medium of cinema could be challenging. Perhaps it was the fact that we made it clear from the outset we were trying to create something new – not simply illustrating his work, but improvising around the ideas and manifesting an interaction between them and the filmmaking process itself – that intrigued him. However, it was challenging for us all to bring the very distinct and disparate worlds of philosophy and filmmaking together. David’s writing is very poetic and descriptive, but in the cinema it is the images and sounds that do most of the work. It was tricky for him to let go of his usual way of speaking and be economical with language. In the end, he was happy with the result, but it was a demanding process.

What is the film about?
The overall question that motivated us was how we could articulate our changing relationship with the “natural” world, and whether cinema and technology could become a vehicle for waking us up to what is around us. When we are truly in touch with our senses, how different is our relationship to the world? What is contained within this notion of “reciprocity” that David describes as existing between our senses and what we encounter? If this interconnection is so integral to our sense of being, why do we continue to separate ourselves so much from nature? What has made us lose this connection?

Of course, within this question there is already an important separation: we describe “nature” as something fundamentally apart from ourselves. This is a central paradox that we were always aware of and engaged with throughout the process of making Becoming Animal. Although the film is partially about our urge to exist beyond our limited notion of self and other – to claim a more expanded sense of being that connects us sensorially to everything – there is also an additional aspect that even to think this realization is to already be one step removed from the immediacy of experience. So the perennial question of how the mind both liberates and limits is also present, and film, with its endless hall of mirrors, can reflect this. We hope the film exists in a space in which the cumulative effect of David’s ideas, woven into a cinematic journey, will start to create new links in the minds of the audience, resonating with their own deep questions about these themes.

What does nature means to you?
Near the beginning of the film, Emma states in her voice-over: “Nature is a tricky word – one that separates us from it”. We both wrestle with this relationship while making films, as everyone does in their own respective ways. The fact that we have created this word – nature – to indicate an environment that is conceptualized as somehow separate from ourselves seems inherently problematic. It’s likely that this notion of separation is one of the reasons we are not more protective of the places and ecosystems we belong to. If we consider ourselves part of nature, and nature part of us, then we might take much better care of the worlds we inhabit.

How can filmmaking be part of this idea that human beings have lost their connection to nature?
Using image and sound recording technologies in this day and age is, of course, a fascinatingly poignant proposition. So much of our experience and knowledge now comes to us exclusively through media. It seems appropriate then to consider an approach that accepts this media as part of our evolution as well – as part of “nature.” For better or worse, this is where we are at; we watch the world through our personal and cultural recordings and transmissions. We engage our devices even as we walk through forests, committing recordings to a bank of memory and displaced time.

It is a paradox to make a film about our senses and the connection to our surroundings, while also addressing how these technologies have changed our relationships to our surroundings. But that is exactly what we wanted to embrace, so that as one watches the film there is an awareness of the mediated nature of the experience of cinema itself. This is why at times you will hear the rustling, breathing animal (Peter) that holds the camera as he makes his way through the brush, and why you see the crew, cameras, and David – our “guide” – intermittently throughout. This layer provides a way to better understand what we are all going through, whether as filmmakers, tourists, or as a cultural audience.

What do you want the spectator to experience?
After a screening in South Korea last week, one of the audience members said that at the end of the film, they felt their relationship with the chair they were sitting on had changed – they felt they were more in connection with it. Others have talked of how the film made them see the colours on a fly differently, or that they had to stop in order to look at a tree and sense the movement it made. All of this seems appropriate. Any response which shifts perception and wakes us up to an awareness of being part of the natural world as opposed to separate from it – an evocation of presence, whether out in the wilderness or within the confines of the cinema – is welcome!

How did you two work together during the shooting and the editing process?
We talked a lot in advance and shared bits of David’s work which especially interested us, and divided this material into themes. Rather comically, at one point during the production we tried to synchronize our notebooks. Finding strategies for being on the same page was important, but this collaboration had already started before the film began, through discussions and shared enthusiasms that developed between us over the years. Peter was the cinematographer, although both of us decided on the visual language of the film. Emma collaborated with David, and helped him edit his words. Both of us were equally involved in editing and shaping the material into its current form, which involved a long process of editorial propositions including the writing of our own bits of voiceover. Both of us, along with David, have been circling the ideas presented in the film for many years, and this chemistry of collaboration was able to bring together three varied perspectives on themes that are very important to each of us.

Sound plays an essential role in the film – how did you design the soundtrack?
The sound is comprised of sometimes subtle, realist, natural environmental soundscapes, in combination with human creations of choral and electronic compositions, all applied separately to specific scenes. Near the beginning of the film we hear elk mating calls at night, which David describes as something that “seems to really set the context, for even all of our human music making.”

On one hand, we encounter the quiet of animals munching and the ambience of wilderness or rushing water, and on the other hand, the sounds of our technologies and our culture – our modern expressions of being. It was a tricky balance to find in the mix. It’s surprisingly challenging to record and reproduce the subtlety of wilderness without imposing one’s own creative influences. We were also considerate of David’s idea that our language has evolved from the sounds of the natural world, like the “russsshhhhhh” of water.

Why do you think Becoming Animal is an important film for the present day?
We hope that the film addresses in some way what we have been calling a crisis of perception, exemplified by the fact that while our culture possesses more tools and knowledge than ever before, our understanding and awareness of the world remains quite limited. It seems that, in looking into the root of our problems, it’s also important to address how we actually see.

While it is important to show calamity, destruction, or injustice, it is not enough to only see these types of representations. How did we let these things happen? What has conditioned us to see the way we see, to relate to the life around us in the way we do?

It is essential to engage in opposition and find corrective measures for major problems like our relationship to the environment, but this also demands a deeper associative perception into the states of our being – especially in relation to the wider non-human world.

Empathy, awareness and reciprocity are qualities we hope Becoming Animal may evoke, to better understand our position as living beings in a living world.